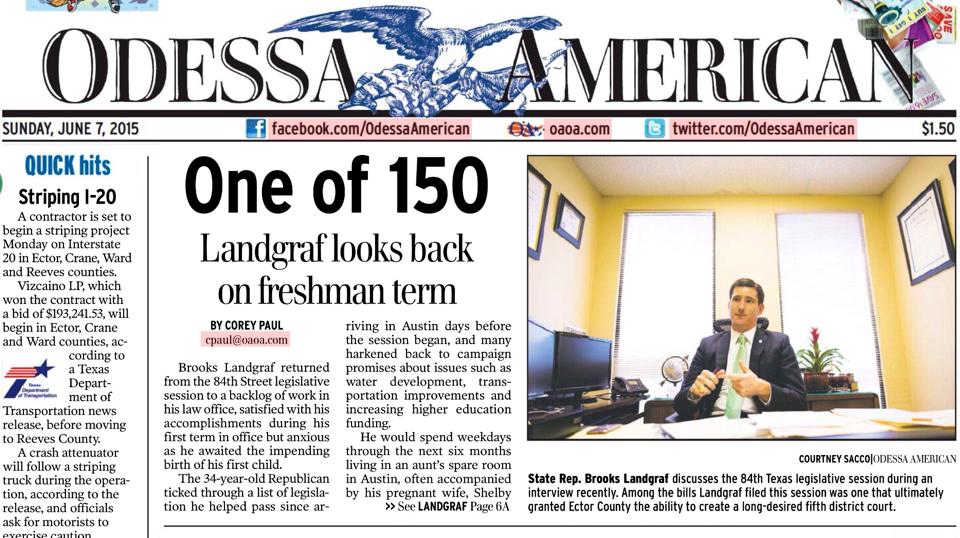 Posted by Brooks Landgraf Campaign · May 22, 2015 12:00 PM
Share
AUSTIN- Friday, the Texas House gave final approval to Senate Bill 1139, which authorizes the creation of the 446th District Court of Texas located in Ector County. State Representative Brooks Landgraf offered the initial legislation creating the court when he filed House Bill 1089 earlier this year.
Landgraf initiated the effort to create a new judicial district in Ector County after discussing with local leaders problems that result from having back-logged cases.
A new district court has not been created in Ector County since 1985, despite significant population growth during the period since then.
"With the creation of the 446th District Court we are ensuring that our citizens' right to a fair and efficient trial is protected," Landgraf said. "This new court will be a welcome addition to our West Texas justice system and will come at no additional cost to taxpayers."
Read more

"It has been a privilege to work on this critical issue that is very near and dear to my heart," Landgraf said. "Today we are one step closer to ensuring that all parents have access to the information available to them when they receive a diagnosis that indicates their child has Down syndrome."

The bill requires that a medical provider furnish information about treatment options and resources for Down syndrome to expectant parents or new parents following a diagnosis of Down syndrome.

During the final moments of debate on the bill, Landgraf offered a critical amendment prohibiting the state-produced information from implicitly or explicitly presenting pregnancy termination as an option when a prenatal test indicates that the unborn child has Down syndrome.

AUSTIN- Wednesday, State Representative Brooks Landgraf and the Texas House passed landmark tax relief for the people of Texas, including the first ever decrease in the state sales tax.

The House tax cut plan that was passed is the largest tax cut plan offered in the Legislature, and provides over $4.9 billion in tax relief for Texans.

After the plan's passage, Landgraf issued the following statement: "By cutting the sales tax for the first time in Texas history, from 6.25% to 5.95%, Texans will see a permanent tax cut every single time they shop in the grocery store, the mall, the hardware store, and even the sporting goods store. Every Texan will see tax relief from this sales tax cut."

The historic tax cut package also includes a 25% cut to the taxes that businesses pay, known as the franchise tax. This plan provides the fairest approach and conservatively focuses on a low, broad rate so that the tax does not unfairly pick winners and losers.

AUSTIN- State Rep. Brooks Landgraf will host a town hall meeting in Odessa on Saturday, April 18th. The town hall, which is open to the public, will be held at the Jack Rodgers Fine Arts Center at Odessa College from 2:00 p.m. to 4:00 p.m.

"One of my top priorities as state representative is to keep an open and consistent dialogue with the people of House District 81," Landgraf said. "This town hall is an excellent opportunity for everyone to come out and discuss the important issues we are facing at the Capitol during the current legislative session."

During the town hall Rep. Landgraf plans to cover a variety of issues including discussion on some of the 16 bills he filed since assuming office in January.

"Higher education has been one of my top priorities since arriving in Austin and the passage of H.B. 100 is a tremendous benefit for West Texas higher education institutions," Landgraf said. "This bill will allow TTUHSC and UTPB to continue producing top-tier talent in the fields of engineering and medicine."

The bill authorizes $48 million in campus construction funds to UTPB to build an engineering building, and more than $14 million to TTUHSC for the construction of a medical education building in downtown Odessa. The amounts authorized for the two projects originated from two bills filed by state Rep. Landgraf.