State Representative Brooks Landgraf provides the following schedule of upcoming Town Hall events in the four counties (Andrews, Ector, Ward, and Winkler) he serves in the Texas House of Representatives. During these events, Rep. Landgraf will provide a brief legislative update and he encourages his fellow West Texans to share their thoughts and concerns. Dinner will be provided for the evening events in Andrews, Ector and Winkler counties.

WHERE: The University of Texas of the Permian Basin, Library Lecture Center

State Representative Brooks Landgraf joined Texas Governor Greg Abbott in honoring two very deserving West Texans with The Star of Texas Award on Monday, at a ceremony hosted in their honor at the Texas Capitol.

Texas Department of Public Safety Troopers Sgt. Michael Thomas and Sgt. Chad Matlock were injured in the line of duty on August 11, 2015 in Odessa, when attempting to arrest a suspect wanted in connection with a drive-by shooting. Both survived and have recovered well.

In thanking both gentlemen in his remarks, Rep. Brooks Landgraf stated "The Star of Texas Award is reserved for a special class of first responders. This award is a commendation as well as a symbol of the immense amount of gratitude that Texas has for your service. When your life was threatened in the line of duty, you heroically put the safety of others above your own. Thank you for standing in harm's way so that you may protect the people of this great state. Texas is a better place because of you and every member of law enforcement that has answered the call to service."

State Representative Brooks Landgraf was presented with the “Courageous Defense of Life Award” by the Texas Alliance for Life Wednesday for his work in passing pro-life legislation, including the “Down Syndrome Information Act.”

The Texas Alliance for Life noted in announcing the award “It is uncommon for a freshman member of the Legislature to take a leadership role in such controversial legislation, but that is exactly what Rep. Brooks Landgraf did. Rep. Landgraf successfully authored an amendment to HB 3374, the Down Syndrome Information Act, which ensures that state-prepared information for parents receiving a Down syndrome diagnosis does not promote or even mention abortion as an option.” 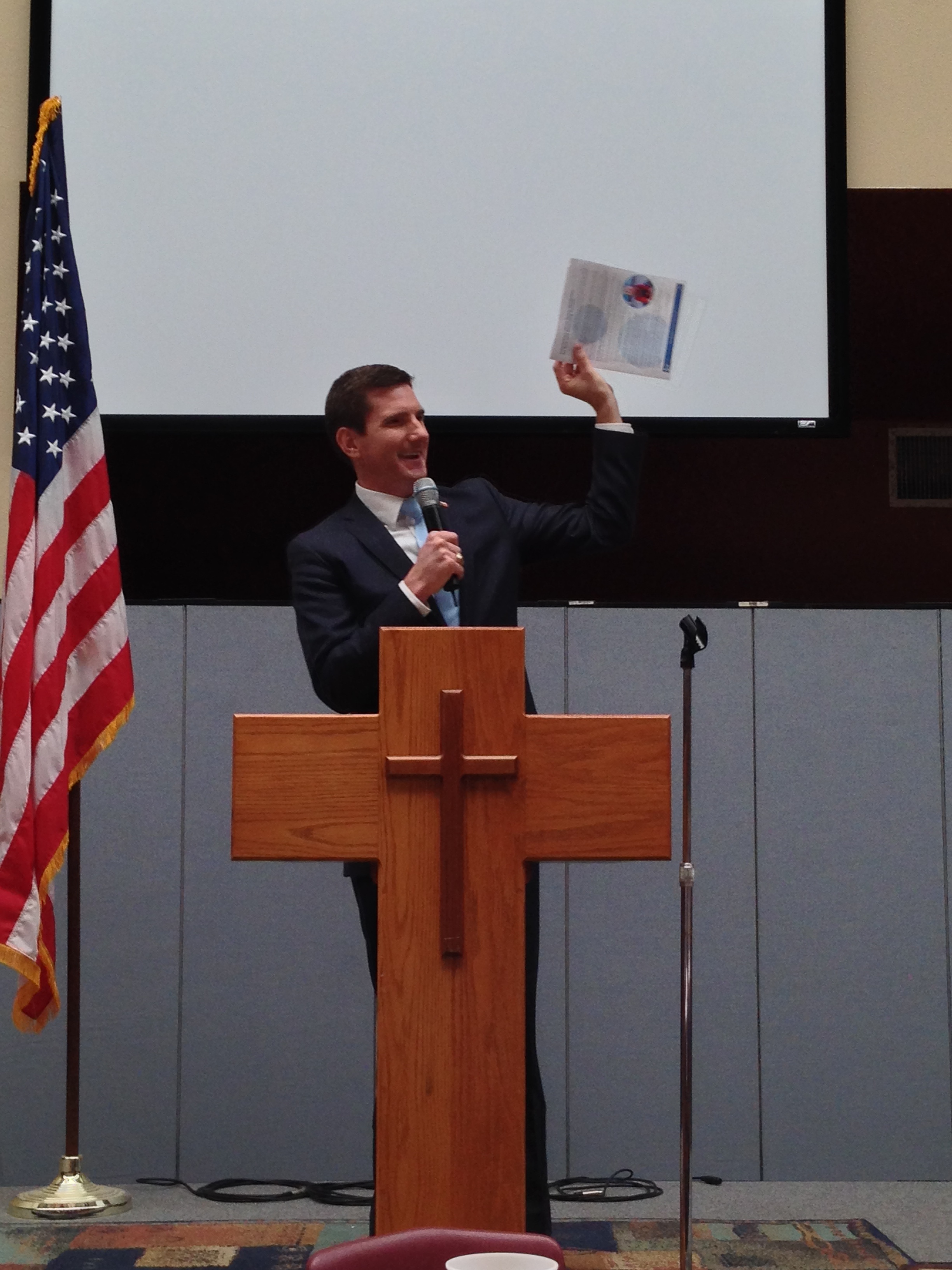 After earning the award, Rep. Landgraf stated “This is an issue very near and dear to my heart. My aunt Phyllis was diagnosed withDown syndrome, and she has brought an overwhelming amount of joy to my family over the course of her lifetime. Children bring countless blessings into our lives, and it is important for parents to have information about all of the helpful resources available to them. This measure has saved lives, and I'm proud of it.”

The Down Syndrome Information Act took effect in September of 2015. It mandates the Department of State Health Services (DSHS) produce current, evidence-based information regarding Down syndrome. It also requires medical providers to distribute this information to expectant parents when a prenatal test indicates a probability of a Down syndrome diagnosis, or when their child is diagnosed with Down syndrome at birth. Since this information has been made public, it has been downloaded hundreds of times from the DSHS website, potentially saving precious lives. 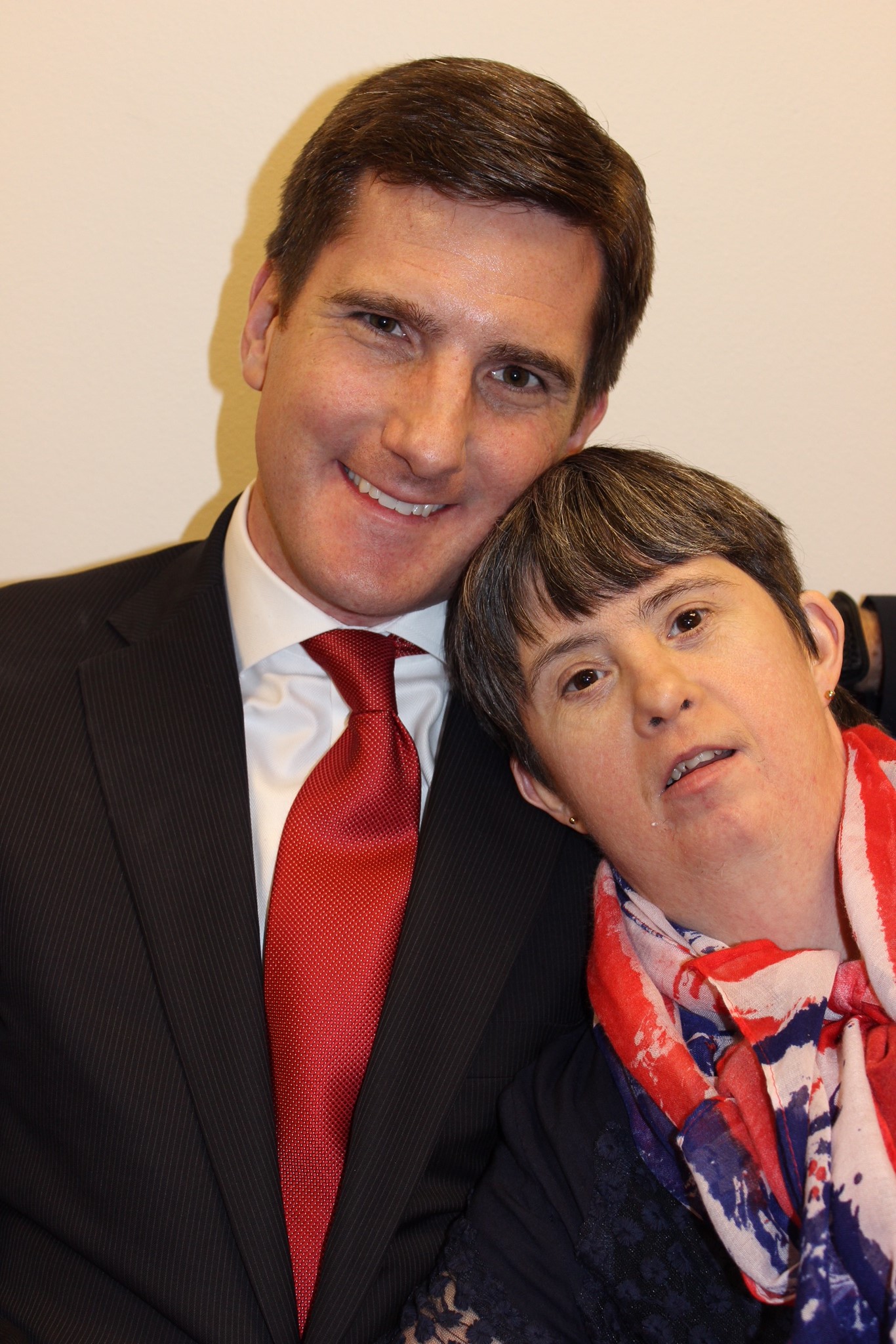 Thanks for letting your voice be heard

This week I was honored to again earn the Republican nomination to serve House District 81 in the Texas Legislature when it convenes in January 2017.

Our community saw a record turnout of voters who wanted their voice heard. Every voter should be proud of their involvement in the process, regardless of whether their candidates of preference won. The challenges that face us require the input of as many citizens as possible. Thank you for taking the time to vote.

This was a long and hard race, but our results are crystal clear. West Texans want a state representative who delivers conservative results, not rhetoric, and who serves as a strong voice for West Texas.

Now more than ever, it is vital for West Texas to not allow interests from the big cities to treat our region like a colony that is exploited for our energy resources and not given anything in return.

That is why I fought to make sure that much-needed construction projects at UTPB and the Texas Tech University Health Sciences Center in Odessa were funded instead of allowing those construction funds to be used in other parts of the state that already receive more than their share of state funding.

Our challenges moving forward will be difficult. With the downturn in the oil and gas economy, the state of Texas will have to tighten its belt just like every family in the Permian Basin is doing.

We will have to address school finance to protect West Texas parents, students, and teachers and reform one-size-fits-all tests that do nothing to educate.

And we will continue to fight a federal government more interested in arbitrary environmental regulation than job creation and prosperity.

These are some of the issues that I campaigned on for re-election, and because West Texans turned out in record number to vote in last week’s election, I know that these legislative priorities have a great deal of support in West Texas.

I appreciate your willingness to let your voice be heard. As always, if there is anything that I can do to better serve you, I hope you will let me know.

May God bless you and may God continue to bless the great state of Texas. 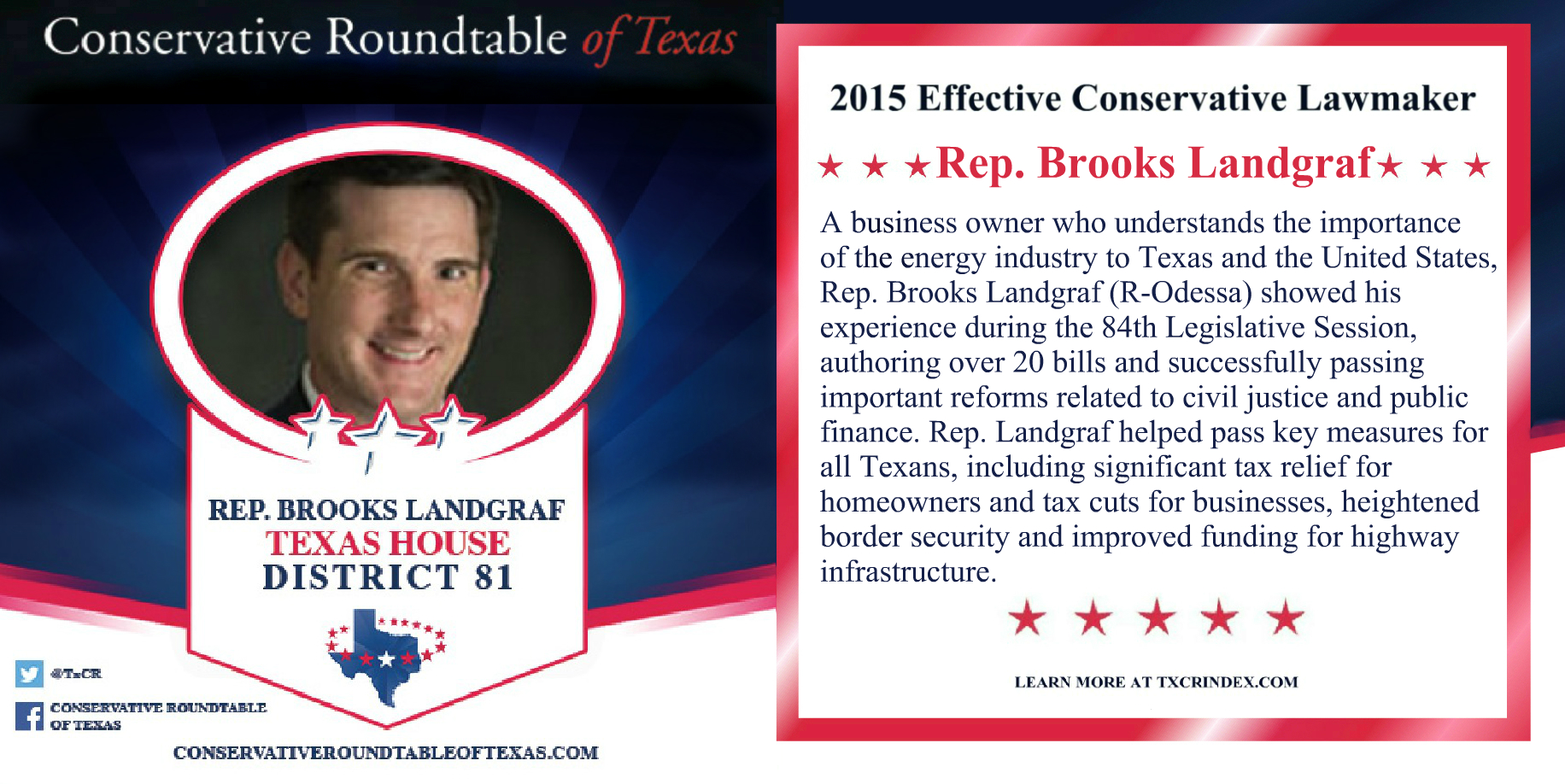 Odessa American Editorial: Landgraf is still the man for the job in District 81 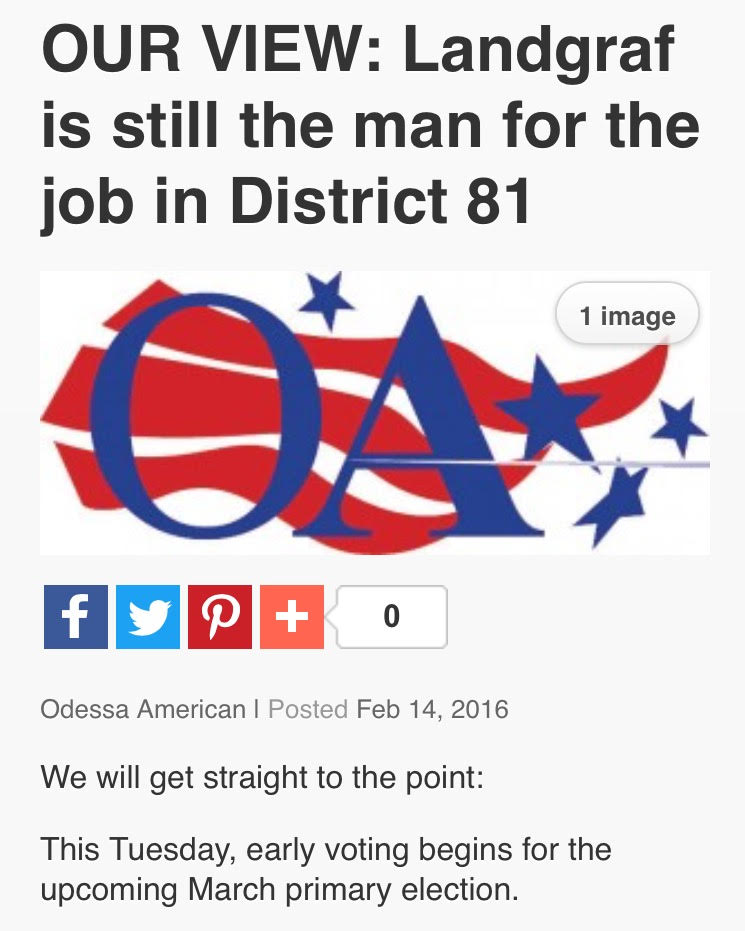 The House Energy Resources Committee is set to discuss the following items:
1) Decline of oil and gas pricing
2) Oilfield theft
3) Oversight and monitoring of agencies and programs