ODESSA — State Representative Brooks Landgraf (R-Odessa) has been endorsed for re-election to the Texas House of Representatives by the Combined Law Enforcement Associations of Texas (CLEAT).

“I’m always proud to Back the Blue. And it’s an honor to have them back me as I run for re-election,” Landgraf said. “The Combined Law Enforcement Associations of Texas’ political action committee has endorsed me as their candidate in this election.”

Landgraf was informed of the endorsement in a letter, a portion of which reads, “The brave and courageous men and women of Texas law enforcement deserve representation, advocacy, and results they can count on. It is with pride that we endorse your campaign for State Representative of District 81.”

“CLEAT is the largest law enforcement organization in Texas, and they fight hard on the side of Texas police officers, sheriffs deputies, state troopers and other LEOs,” Landgraf continued. “I’m proud to be right there with them in that fight.”

During the 87th Texas Legislative Session in 2021, Landgraf co-authored House Bill 1900, a bill designed to penalize cities that try to defund their police departments. The bill eventually passed, going into effect on September 1, 2021. 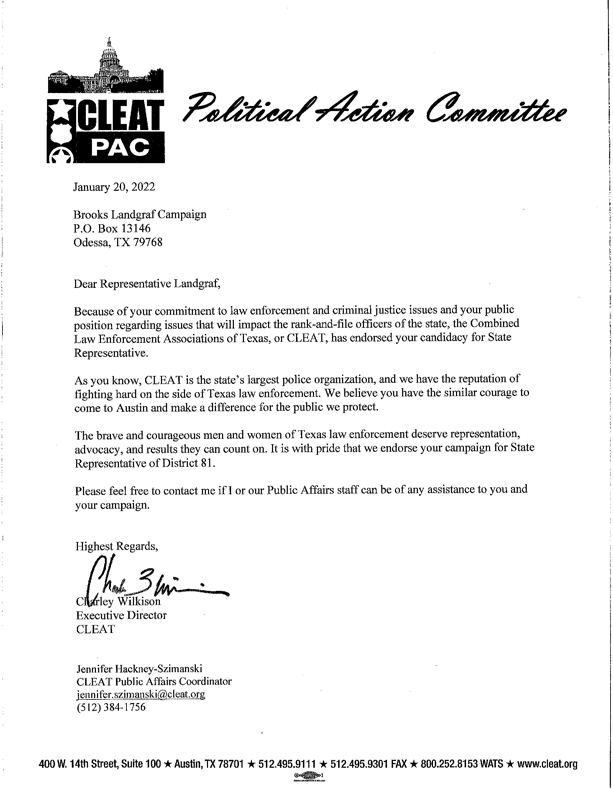